One project that I am involved in is an ongoing review of empirical research on the impacts of OER adoption. Recently, I authored an in-depth article focusing on empirical research relating to perceptions and efficacy at the college level. It was published by the journal Educational Technology Research and Development and you can access the open-access version of this article. But if you’d rather watch the movie (sometimes the movie is better), please this enjoy video, courtesy of George Veletsianos and Research Shorts.

Recently, Linda Williams, David Wiley, Lane Fischer, and I published an article in The International Review of Research on Open and Distributed Learning. The article, “Maintaining Momentum Toward Graduation: OER and the Course Throughput Rate,” is open access and available on IRRODL’s website. For those who don’t want to read the full version, here’s a quick summary:

In this case study, we compared students using traditional textbooks with those using OER at Tidewater Community College to compare their performance on what we call course throughput rates, which is an aggregate of three variables – drop rates, withdrawal rates, and C or better rates. The idea behind Course Throughput Rate (CTR) is simple – there are three key hurdles students need to clear in order to get academic credit for a course. First, they need to NOT drop the course, second, they need to NOT withdraw from the course, and third, they need to actually pass the class.

We examined two groups of students over four semesters, some of whom used OER and others who used traditional textbooks. These two groups were further subdivided into students who took face-to-face classes and those who took distant classes. For simplicity, I’ll only describe the face-to-face results; however, the two sets of results were very similar, 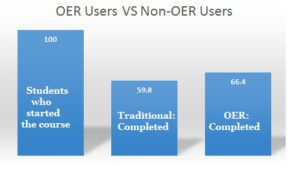 There were approximately 30,000 students enrolled in face-to-face classes and just over 1,000 enrolled in courses who used OER. 59.8% of students who used traditional resources successfully passed the class VS 66.4% of students who used OER. This was a statistically significant result, and perhaps the practical significance is even greater. Students save millions of dollars and are more likely to succeed academically. If there were a learning resource that students could buy for $90.00 that would increase their chances of success in the course, we would likely encourage students to purchase it. In this case, providing a FREE educational resource appears to be correlated with improved student outcomes — even better!

The design of this study cannot establish causation. This is a pilot study, and one of the limitations is the large disparity in numbers between the enrollment numbers in the users of OER and traditional materials. A related weakness is that OER adoption or non-adoption is perfectly confounded with faculty in this analysis. It is possible that the observed differences in course throughput rates are more attributable to differences in faculty than differences in the price and licensing of the required instructional materials they assigned. An additional limitation of this study is that we do not have data indicating that the student groups in the two sets of courses are equivalent. It is possible that certain types of students specifically seek out OER courses, and that these students tend to do better academically. At the same time, it is equally possible that the students who seek out OER courses generally tend to do worse academically, thus understating the results of this study. Future studies should remedy these weaknesses.

A recent study synthesized nine OER efficacy and found that in general students tend to do as well or better when using OER. This study also underscores this finding. As I wrote previously, this research causes me to wonder, “If the average college student spends approximately $1000 per year on textbooks and yet performs scholastically no better than the student who utilizes free OER, what exactly is being purchased with that $1000?”


Deprecated: Directive 'allow_url_include' is deprecated in Unknown on line 0